This past weekend Flyer, Snap! and I got up at “o-dark-thirty” in the morning to drive the two and a half hours to Canine Sports Zone in Middleton, WI to compete in the first Wisconsin Agility Cup and we had a blast!

The Wisconsin Cup is one of a number of agility competitions being held around the US featuring courses designed by FCI judges and competitors in an effort to bring the flow and challenges of the courses competitors face when competing overseas. This event featured courses designed by Jose Luiz Filho from Brazil. They had wonderful flow with interesting handling challenges that I wish we saw more of here in the US. I contacted Jose Luiz and he was kind enough to share his courses!

The event was expertly organized by World Team member Claudette Mo and judged by fellow Team Member Shane Miller who kindly drove in from Western Illinois just to judge the event.

Here are the rules (taken from the flyer):

Refusals and faults will be called and assessed 5 points. Up contact will not be judged in A‐frame or dog walk. Handler who gains an advantage by touching her dog or an obstacle will be faulted 5 points. A dog will be eliminated if it accumulates 3 R in the same run; goes off course; soils the arena; leaves the arena prior to completing the run; handler jumps over an obstacle or disturbs an obstacle so it cannot be negotiated correctly by dog.Money prizes for 1st place in rd 1-3 and 1st-3rd place in finals, in each jump height. Dogs jumping lower than their regular jump height will only be eligible for money prize for 1st place in finals, all dogs jumping lower, regardless of jump height.

Yes! Money prizes and a low entry fee of $35 before closing and $45 day of show. A bargain to run some fun courses in a competition environment!

Here are the round 1 Jumpers courses: 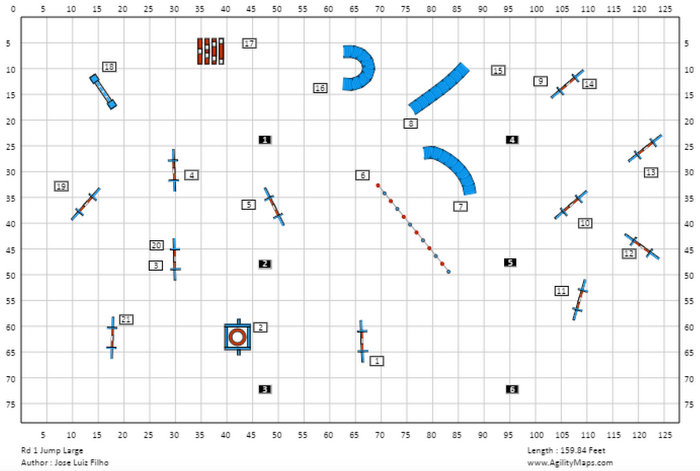 In the opening sequence of the large dog course the question was which way to wrap 4? I chose to turn Flyer to his left which set him up to see jump 5 and the weave entry, knowing he’d “weave suck” to get them. I had originally walked keeping him on my right after the weaves and Blind Crossing or Rear Crossing Rear CrossLearning the Rear Cross tunnel 7 into tunnel 8. But I really wanted to qualify, so I went to the end of the weaves with Flyer, Front Crossed Front CrossLearning the Front Cross and kept him on my left as I went to the “far” side of tunnel 7 which set up an easy push to tunnel 8.

During the walk everyone was worried about the off course jump 13 as dogs came over jump 9. In our case Flyer was right with me to jump 10 and the Push to the Back Side Back Side/Back Side JumpHandling the Quad Back Side - Patrick Bucher Course/VideoThe Connection Between Threadles and Back SidesBack Side of Jump Handling Combinations - Video to Blind Cross was “easy-peasy”.

The jump line to the two tunnels 15/16 was another interesting handling challenge. The handler could get somewhat ahead of the dog down the jumps but could they beat their dogs to the tunnel exit? Did they need to? I think most/all(?) handlers stayed dog on right through tunnel 15. Just in case, I walked a Blind Cross 14-15 to put Flyer on my left with the thought of staying along the wall and treating 15-16 like a Serpentine Serpentine SequenceSerpentine Handling Techniques. But when the time came I wasn’t far enough ahead to try it…

I also wasn’t far enough ahead to Blind the exit of 15 (some handlers did) so I settled for a kind of ugly Rear Cross on the flat on the way into 16.

From there it was just a question of which cross to use 19-20, I started to go for a Front and backed off to a Rear Cross, since Flyer reads them so well.

Here’s Flyer and me running the course and taking first place in the 20” group:

Here are the round 2 Jumpers courses:

The round two large dog Jumpers course had a challenging opening. This was definitely the section of the course that eliminated the majority of dogs. The dog needed to take jump 2 in collection in order to be set up to take the long jump and take it facing the correct side of the tunnel. Handlers that needed to be near jump 2 to cue collection weren’t able to converge on the dog’s line to put the dog in the correct side of the tunnel. The most successful approach was to Reverse Spin on jump 2, and get going immediately down the line. I was the very first dog and my forward send with outstretched arm didn’t cue enough collection and Flyer sliced the long jump, which let me turn him around and retry it with a good line to stay on course with a 5 point fault instead of an elimination.

The post near jump 7 factored in to some handler’s choice for which way to wrap jump 6, but it was only a minor handler restriction.

The Serpentine of 12-13-14 starting with the Back side of 12 was tough for handlers with fast dogs as the dogs got ahead of some handlers. I was just a step too far behind at 12 and Flyer dropped the bar jumping in toward me as we ran at full speed.

The rest of the course was pretty straight forward, a lot of handlers Front Crossed after tunnel 16 to get into the center of the final PinWheel. I liked the Rear Cross on the flat after 17 but it wasn’t the most aggressive handling… it left me standing around.

Here’s Flyer and me running the course and taking 2nd with two faults in the 20” group:

Here are the round 3 Agility/Standard courses:

In the large dog course the opening was pretty straightforward, a couple dogs missed the weave entry. There were a number of handling options for 6-7-8, success hinged on getting the turn at jump 7 and keeping connected with your dog. During the walkthrough a few of us commented on how we found ourselves wanting to send the dog to the wrong side of tunnel 9; there was something about how the course was layed out.

The offset Threadle 11-12 was a source for some eliminations and all variations of pushing to the Back (either side of 11) and Front/Blind crosses were attempted. When the Blind on the way to 12 was executed well it was very nice. There was some concern about showing too much extension on the way to the Dog Walk approach when the dog sliced 12.

Most handlers sent their dogs through the gap between 14-15 turning their dogs to their right and sending over 15. But some did push to the right edge of 14 and Blind the approach to 15.

From there it was straightforward to the Threadle at 19 (for everyone but me!).

I pushed Flyer to the Back Side of 17 for an elimination! Which let me take advantage of the FCI rule that you can back up a couple obstacles to retry a sequence once you are eliminated. So I fixed it and was able to proceed with my verbal Threadle cue at 19 (Flyer did it perfectly).

Here’s Flyer and me running the course and being eliminated:

Here are the Finals round Agility/Standard courses: 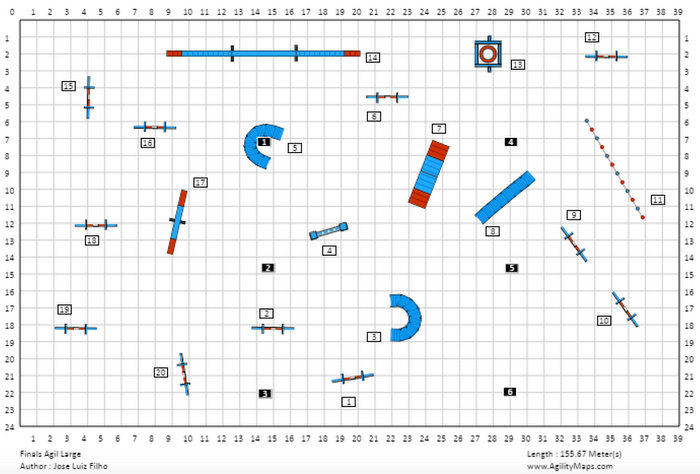 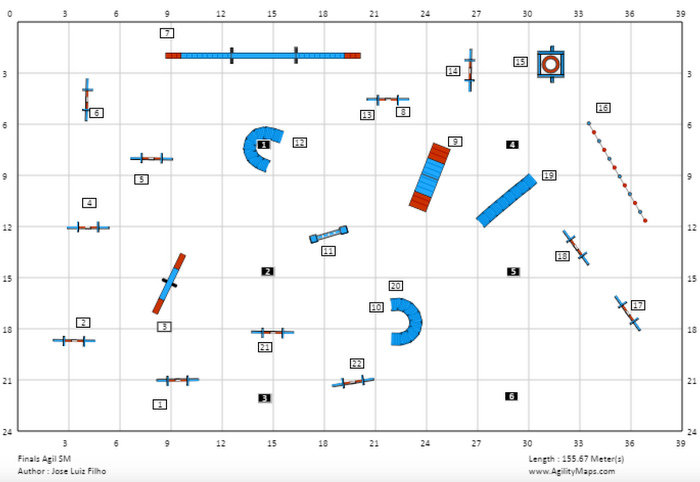 The opening of the large dog finals course had most (all?) handlers wrapping the right upgright of jump 2 and then the question was which side of jump 4 should the handler be on? I chose being on the right side and keeping connection with Flyer and the off course side of the tunnel was never an issue.

Again a choice of sides for the A Frame. I chose to treat the A Frame, tunnel and jump as a Serpentine and my choice almost caused Flyer to miss the A Frame down contact. If you watch the video it was very close and made judge Shane really think if Flyer got his left front paw in the yellow…

The other challenge of showing all that motion on the way into the tunnel as I ran to get into position to blind cross 9-10 meant Flyer came flying out of the tunnel and almost broke the plane of the weaves before I could turn (and turn him) back toward jump 9.

During the walk through there was a lot of discussion by handlers with running dog walks about 12-14 followed by the Back Side at 15. That was a 90’ sprint! I ended up Front Crossing the end of the weaves and continuing to rotate to wrap the left standard of jump 12 before taking off down the line (to our stopped DW). I think everyone ended up handling the sequence with dog on right.

From there it was a pair of Back Side pushes or a Push to (“forced”) Front Cross possibly followed by a Ketschker or Jaakko. Most handlers seemed to end up with dog on right on the way to teeter.

Then it was straightforward through to the ending.

Here’s Flyer and me running the course and taking 1st place with our very close A Frame contact in the 20” group:

Shane Miller continues to be a big advocate for setting up these competitions running FCI style courses. He is actively supporting groups organizing them and promoting these “Cup” competitions so more people can have fun running fast, flowing and challenging courses. So get a group together and setup your own “Cup” challenge in your area! I’m looking forward to attending the next one!