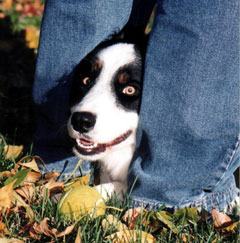 After an extensive interview process we adopted Milo from Illini Border Collie Rescue in 2000. He was probably around 18 months old at the time. Milo was fostered by Lisa Ochoa who was sorely tempted to keep him herself. She could see how athletic he is; but unlike some driven Border Collies he is very sweet and has a soft temperment. As Lisa said, he is extremely attached to tennis balls; even for a Border Collie.

It is really hard for me to describe our dogs’ personalities; especially because they are Border Collies. They always sound weird and compulsive. Milo is both of those things but so much more. Maybe some anecdotes about him will give you a window into his personality.

When we brought Milo home we got our first hint as to the training road ahead. We brought Milo and Mr. Peabody up to the front stairs to the house. Mr. Peabody just marched up the stairs as usual. Milo kind of hemmed and hawed at the bottom of the stairs and we called him to come up the stairs. Apparently Milo had never been up any stairs before; so he just threw himself half way up the stairs, scrambled to get a footing and launched himself up to the landing. If there is any story that sums up Milo’s philosophy this is it; he’ll just throw himself into any situation you ask him to.

Milo is often “worried” about doing the wrong thing. So he takes pleasure when he can repeat a behavior that will earn him praise. It was so sad when we first got him. He only knew the things that Lisa had taught him, so if he didn’t understand a new request from you he’d just try the same previously learned behavior over and over and over. Never offering up a novel behavior. It was only after he learned that he’d never be scolded or punished for trying something new that he learned to learn. Even years later he still can get “sweaty” or nervous when learning something new; but if we break it down enough and reward him frequently he’ll eagerly try his best.

Milo learns wonderfully by repetition. He’s happy to try something that will give him a reward as many times as you ask him. Consequently, on the Agility course he’s drawn to contacts and weave poles since he’s been rewarded hundreds (thousands?) of times on these obstacles.

He is a scholar of human behavior. He’ll follow you around the house and silently watch you for hours. As we say “he’s everywhere you want to be”. If you go somewhere Milo will be standing behind you and looking for signals of an activity that might involve him. He’s proof that random rewards work to reinforce behavior. If you ever went outside after some action he’ll zip to the door as soon as you repeat that action.

Unfortunately, he has no sense of self preservation. He just throws himself into everything. At one of his first flyball tournaments he bobbled a ball off the flyball box. The ball shot through one set of baby gates surrounding the ring and was on its way into the the next ring. Some dogs would chase the ball up to the gates, or even jump over the gates to get their ball. Not Milo. He went through the gates, and dragged them with him into the second set of gates surrounding the next ring.

Just like the musician from the movie “Spinal Tap”, Milo “goes to eleven”. He doesn’t marshal his efforts, sometimes he just goes as fast as he possibly can. This was driven home within a couple weeks of getting him when we were playing with some of the dogs at Dearlove Agility. Vicky’s GSD Shira took Milo’s tennis ball and started running. Milo, having little knowledge of how to play with other dogs, took off after her. She started running in a circle with Milo in hot pursuit. Milo was running in a wider circle than Shira, and just couldn’t catch her. So he just ran faster and faster; grass was flying up behind him in a rooster tail, his fur was streaming back, tongue lolling, but he never figured out that if he just slowed down he could turn tighter and catch her. Ever since then he has been suspicious of GSDs; they might take his prized toy… 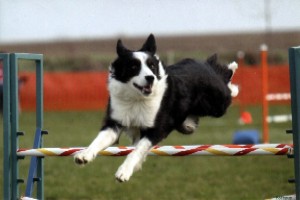 Copyright Tamara Fanter at Fotopup
Tamara is a great Agility action photographer,
here she captures the happy finish to a clean run.

But most importantly, Milo is just sweet. He’ll “ooze” up onto the couch next to you and start licking any exposed skin. He knows he’s not supposed to but sometimes he just can’t help himself. He’ll seek out people, especially men, and lurch up to them to be petted and to lick them. Unlike the classically aloof Border Collie, Milo loves people and wants to be involved in any activity with anybody.

Milo competes in both Agility and Flyball. His speed and drive are a mixed blessing; a wrong or slow step from his handler and he is off course too fast to do anything about it. I love this “handling on the edge”; it is forcing me to become a smarter and better handler. I know I still have a lot to learn from Milo and I’m looking forward to the lessons.