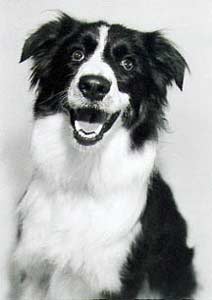 Copyright Sheri Berliner at Petraits
Sheri really captured the
happy twinkle in his eyes.
I love her portrait photography.

Mr. Peabody is our first dog. My friend Nancy got him as a puppy in 1994 from Marshall Kennels in Roseville, IL. She did extensive research on dog breeds before getting a Border Collie. I had no idea what we were in for.

This is one of the hardest things I’ve ever had to write. There is no way I can string together words to describe how Mr. P has affected me and how he has changed my life. He is just so special. But don’t all dog owners say that about their dogs? I don’t want to convince you that he is somehow the greatest dog that has ever lived; although my Mom would probably argue that point. But he has a place in my heart forever.

Mr. Peabody has about twenty nicknames (Mister, Petey, Marty, etc) and responds to all of them. Of course some more than others. Just like some Moms use their child’s full name to get their attention, a “Mister Peabody” can be required to get his full attention.

He is eminently confident. Sometimes he acts like he is being stubborn; and sometimes he is. He’ll decide who he wants to listen to and if he wants to do what is asked of him. The first six months of learning Agility involved watching Mr. Peabody run out of the ring and go looking for his Mom. You have to earn his trust to get him to do what you want. But once you do he’ll do whatever you ask of him.

One of the scariest and most telling stories about Mr. Peabody happened at a flyball tournament when he was about 8 years old. A young dog from the other team crossed into Mr. Peabody’s lane as he was going to the box. The two dogs collided head on at full speed. The impact stopped both dogs in their tracks. After checking out Mr. Peabody he seemed fine. We massaged and stretched him; checking out every joint and muscle. He seemed just fine and raced the a little more later in the day just as excited as usual.

When we got home Nancy decided there was something that just wasn’t right about him (a Mom knows these things). After two trips to the emergency vet (the first time they didn’t think anything was wrong), we found that he had a collapsed lung! X Rays showed both lungs were bruised at the front of his chest and one was leaking air into his chest cavity. Over the next week he was in an oxygen tent and they were removing 1-2 liters of air out of his chest cavity each day to allow his lung to reinflate. We were terrified we might loose our special little guy. We got so much positive support from our friends, family, and the Flyball and Agility community. Mr. Peabody ultimately made a full recovery and not long after went back to Flyball with his usual enthusiasm.

But what does it tell you about his character when he was willing, not just willing, but pulling and barking while waiting to run Flyball after his collision? It tells me he is a Border Collie; not just a Border Collie; a dog with an inner strength.

But what this also tells you is that we are our dogs’ guardians and we must always be vigilant. Especially with Border Collies since they’ll work until they physically can’t. And now we always carry a fully stocked first aid kit to Agility and Flyball practices and competitions, our doggy “crash cart”.

Mr. Peabody isn’t just mentally strong, he is smart. This is a dog that taught himself to turn door knobs and knows which doors in the house to push on and which to pull. But he’s not just smart, he’s crafty. Mr. Peabody is the dog that took all the cookies out from under the plastic wrap covering a plate on the table and left all but one corner of the plastic wrap and the plate in place. The same dog that ate a bag of fortune cookies and left all the fortunes in a pile in the middle of the living room floor.

Another interesting aspect of Mr. Peabody’s character is that he knows how to meter out his efforts so he is always “ready for action”. He’ll push himself when necessary but always keeps a little in reserve so he won’t miss out on any activities. He’ll let Milo make the long runs to get his toy and then intercept him on the way back. 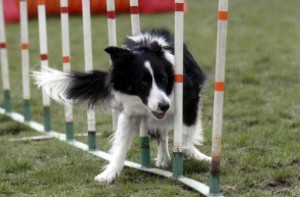 Mr. Peabody is retired from Flyball competition; but he still practices with the team. He loves to play the game, will do the full run by himself when we are waiting, and line up at his place on the start line.

On the Agility course Mr. Peabody is solid and trusting. If I’m really slow he’ll think for himself and take the next obvious obstacle. If I’m just late with my commands he’ll do everything in his power to try to comply. If I had had more interest in competing when he was younger we might have earned a few more titles. But it is always fun just to run a practice course with my special guy and see the sparkle in his eyes and the happy smile on his face.