We’ve been on the look out for a toy that Mr. Peabody would like that makes noise even after it has come to rest. Since he is blind in one eye and only has about 25% vision in the other eye he sometimes has to search around for his toy when we play catch and a noise maker would help him locate the toy. It is remarkable that he can still grab his toys out of the air as frequently as he does.

I was buying some other agility related stuff at the Clean Run Online Store and saw they had some toys that made noises and/or flashed lights. But most of the toys were hard rubber and/or made some pretty strange sounds. Then I came across the Play-N-Speak Football Dog Toys. They are plush toys with a Velcro covered slit in them. Inside the slit is a pocket into which an egg shaped module containing a battery, microphone, and a speaker are placed so that the “egg” stays in the middle of the toy. Here’s what it looks like taken apart: 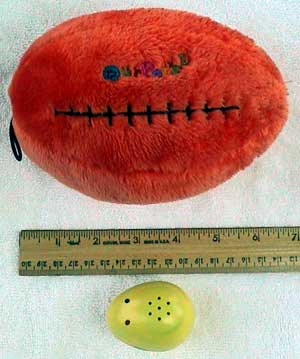 Two really neat features of this unit are that you can record anything you want (as many times as you want) into the “egg” and the recording starts playing when the toy has an impact. So you can tap the toy against your hand to start the playback and then throw the toy to help the dog hear it as it is coming. The playback last for 10 seconds which is pretty long. I don’t trigger the recording before throwing the toy for Mr. P, since he can still mostly see the toy coming, so the recording triggers when the football hits the ground; giving him 10 seconds to find it by sound.

However, I had a rude awakening when I first used this toy. I didn’t know what to record so I just recorded my voice in a lilting tone saying “Peabody… Mr. Peabody…“. I put the egg back into the toy and sealed the Velcro. I gave Mr. Peabody his “Ready”, “Go” command (so he knows a toy is coming) as soon as the toy hit the ground and the recording started Mr. Peabody and Milo went nuts! They went on full intruder alert - stiff legged, heads bolt upright barking at the door! Someone had snuck into the house and they had to warn me about it! I’m lucky I only recorded my voice a couple times on the tape. With some reassurance they finally calmed down. I must have been like the time when Milo Was Surprised By a Bear… So I immediately replaced the recording of my voice with a recording of a squeaky toy.

Well Mr. Peabody loves this toy because he loves plush, ball-shaped toys. However, like any toy with electronics or such inside it, you can’t let your dog play with it alone. Given time Mr. Peabody would definitely extract and crush the “egg” (although it is very solid) if left to his own devices. So I highly recommend this toy the Our Pets Play-N-Speak also comes in other shapes and sizes.