Elicia Calhoun's tragic accident and search for her dogs in June of 2011 got a lot of dog owners, like me, looking into dog locating/tracking hardware.

For some reason people think microchips are an alternative to tracking collars. They solve two very different problems. Microchips help someone find the dog’s owner once they have the dog. Tracking collars help you find the dog. Our dogs have microchips and I decided I wanted a tracking collar for whenever they are outside the house in case we get separated for any reason. Hunting dog people have been using tracking collars for years when their dogs are working in the field. They originally were custom hardware that often used radio tracking and in later years added GPS satellite locating.

After researching I bought the Tagg Pet Tracker as a Christmas present in Dec 2011 when I saw it used GPS to locate itself, cellular for bi-directional communication and had a phone app that allowed for near real time locating of the collar and the phone on the same map. I think it was on sale too.

Tagg Tracker and Base Station 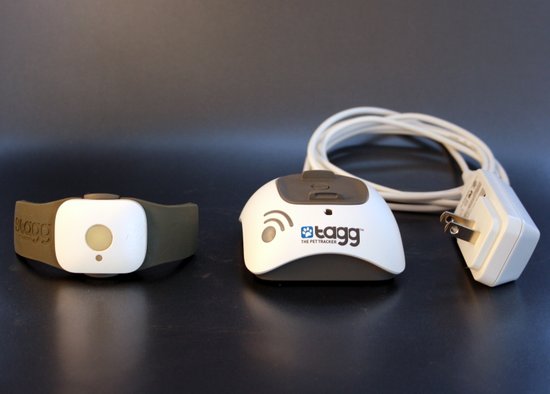 The tracker itself has a GPS receiver (to figure out where it is located) and a cellular “phone” (to allow requesting/reporting it’s location) built in to it. It also has circuitry to detect when it is near it’s small battery charging base station. Once it detects that it is near the base station is switches the collar into low power mode to conserve it’s rechargeable battery. More importantly the collar detects when it gets out of range (~100ft from the base station) and triggers a notification along with the dog’s location. I put the base station in the “dog room” where they spend a lot of their time and where there is good cellular reception.

You put a clip on your dog’s collar(s) (a couple sizes are include) and the GPS tracker snaps onto the clip. There is a small button under the tracker that is depressed by the clip. That way, if the tracker comes unsnapped it sends out a message that it has become disconnected from the collar. You can then track the device.

The system can alert you via email, SMS message and there is an Android/iPhone app you can use too. The app also allows you to initiate tracking and locating of the collar. Tracking will “ping” the collar and update the collar’s location on a map once every minute. The location of the phone is shown on the map also. You can also ping the collar more frequently by clicking the locate button in the app whenever you want. That seemed to update the map in about 5-10 seconds. There is also a Directions function which gives you directions from the phone to the collar.

The collar has another interesting feature which is an activity monitor. I believe it uses a built in accelerometer to detect when the dog is in motion. From that data the web site/app can show you when your dog is active throughout the day and the total number of active minutes.

Lastly, the collar will alert you when it’s battery is low and needs recharging. When Flyer was going to daycare each day I was getting about 5 days between charges. Now that he is at home most of the time it lasts longer and just put it on the charger at night when I get a notification.

The collar and base station is currently selling for around $99 with two free months of service or $199 USD including 12 months of the service. You pay a monthly fee of $9.99 USD for the service for the first collar and $4.95 USD for each additional collar. You don’t pay any additional cellular service fees.

You create a login on their website and register your base station/collar and configure your alerts. That was all easy to do. Then I just followed the simple directions to put the base station where it can get a cellular signal (anywhere in my house).

I had some trouble getting my tracker to “talk to the mothership”. At first it connected (via it’s built in cellular phone) and after it went through a firmware upgrade it wouldn’t reconnect. It took four phone calls and going through the reset sequence three times to get everything working. It might have only taken two if I had gotten the second, more experienced, technician to start out with.

Since that time I haven’t had any problems with upgrades or communication.

If you click the Start Tracking button on the app you see a map of the phone’s location and then when it locates the collar it shows another icon for the collar location. The collar itself starts flashing it’s small blue light (which might help in a night search but mostly gives you feedback that tracking is initiated). The phone’s location is updated in real time as you move around and the collar’s location will be updated each minute. 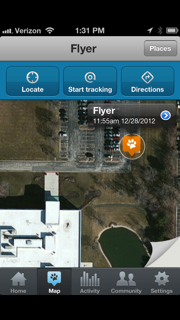 For a dog in motion that update rate won’t be fast enough so there is also a Locate button that immediately sends a signal out to the collar (via cellular service) and the map updates typically within 5-10 seconds. You can keep hitting that button to get location updates. It worked well and I’m happy to report I haven’t ever needed to use it in an emergency.

The activity monitoring feature was kind of fun - I could see when I took Flyer out to play in the yard and when we went on walks. The app (and web site) show a time line view of the dog’s activity.

As a test I left the collar/tracker on Flyer when he was playing with Petey to see if the tracker could get dislodged. They wrestle pretty vigorously and within an hour or so I got a message on my phone/email that it had become disconnected. Sure enough it was laying on the floor and even worse Flyer had “mumbled” on one end of it and chewed off part of one of the antenna rubber flaps. It still worked and I fixed it by dipping the end in the rubber liquid you use to put non-slip handles on tools. It is an ugly but water proof fix. 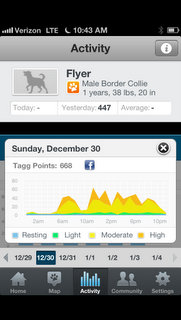 Then I asked other agility folk and found out they make a zip on/off neoprene “Tagg Guard” that slides over the collar, clip and tracker that keeps the tracker from being removed from the collar. That worked really well for 6-8 months then one day as I was unzipping it the sliding part of the zipper came all the way off the zipper tracks - and then I lost it before I could see about fixing it… If you have an active dog and leave the tracker on I’d buy the “Tagg Guard”.

Since Flyer was a young dog at the time I bought the Tagg I had a dog walker walk him noon-ish on those days when I wasn’t working at home. With the SMS message and email (each can be configured on or off) I’d get an alert at work when the dog walker took him out and brought him home. That helped me uncover two things. The first was a dog walker who was reporting on their sheet that they were walking him starting at 12:00-12:30 but I was finding via the Tagg that he might be walked any time from 11:30-2:00. When I called the office and asked about the discrepancy he started getting walk much closer to when I had requested and the report was always accurate…

That service went out of business and the first day the new service walked him it was 3:00 and I hadn’t received an alert from Tagg. I called the service and they said that Flyer was freaked out by the male walker and he was in a hurry and had just let Flyer out in the yard… The walker came back later, spent more time with Flyer and took him for a walk. When I got the alert that Flyer had left the zone I initiated a tracking from the web and was able to verify that the walker took him on the route I had requested. After that time the service was very attentive.

When I’m traveling giving seminars I miss my dogs and I like getting an alert on my phone when Nancy takes them off to swimming or around the town.

I like this unit and many of my agility friends use them. The only time I might not recommend it is if you are in a very rural area with limited cellular reception as that is required to communicate with the tracker for it to report it’s GPS location. I say buy it and buy a Tagg Guard at the same time. I has given me peace of mind when my dogs are out of my home.

Tagg just started an affiliate program, so if you order your Tagg bundle with 2 months of service I’ll get a credit toward earning a free month’s monitoring. That didn’t influence my review, I always “call ‘em like I see ‘em”.

Currently they have a Father's Day 25 % off promotion, enter code DADS2014 at check out. If that has ended the code REFER12 saves you $12.