An Inside Arm signal is made by moving the hand and arm closest to dog in an outward motion. It is akin to tossing a Frisbee without bringing the Frisbee across your body. In general, the degree to which the arm is drawn away from the body (towards the dog) indicates how sharply the dog should execute the turn. In the sequence of pictures below the dog would be on the handler’s right and turning to the handler’s right.

The Inside Arm Signal/Flip was all the rage way back in 2004 when I wrote this article. Within a couple years those of us using it learned it has dire consequences. Anytime you used your inside arm to signal your dog to move forward they became more likely to turn away from you instead of moving forward; especially when there were other obstacles around. All it took was a little rotation of your hand/arm as you were running... I would have Milo shoot off at 90 degrees from me and take an off course.
I'll never teach this to another dog. Now I use my outside arm and rotate in to the dog (just like a Rear Cross).

Using the Inside Arm Signal

An Inside Arm signal is mainly used in two situations:

I’ll discuss the first use in more detail in a future Rear Cross Rear CrossLearning the Rear Cross definition.

An example of the second use is shown in the diagram below. In this case the handler can easily use an inside arm signal to turn the dog right into the tunnel (at almost any horizontal distance). The handler then turns (either to their right or left) towards jump 4. While there are other handling options, this approach turns the dog quickly and tightly into the tunnel. The dog can turn immediately upon release from the contact, without taking a stride forward (unless the dog is on an opposite lead when they ended the contact - but a Two On Two Off Contact tends to leave the dog stopped briefly so they can stride off on the appropriate lead without having to change leads before turning). 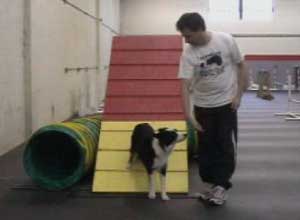 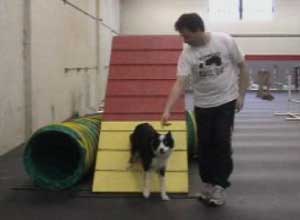 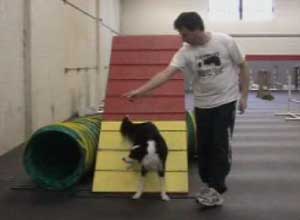 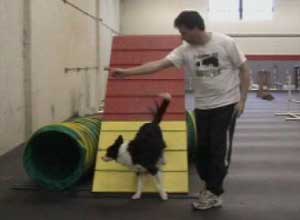 An opposite arm signal could work here but most dogs seem to take a stride or two off the contact before reacting to the handler’s turn. I think it is the need for the handler to take a step to turn their body after releasing the dog from the contact that causes the dog to stride forward before detecting the handler’s signal to turn.

Lastly, there is also an intuitive aspect of using an Inside Arm signal. It is, by definition, performed on the side closest to the dog; so it should always give the dog an immediately visible cue as to the direction you intend for them to take. I say “immediately visible” because, regardless of your forward momentum or body position, it is almost always fast and easy to get your dog-side arm out and direct the dog in the appropriate direction.

Click this link to search the whole site for “Inside Arm”.