Happy Birthday Meeker! Today Meeker turned three years old. He’s been with us just under two years (one more month until his adoption day) and has turned out to be a sweet little guy.

I took some photos today, I raced outside when the sun shone through the clouds. The photos aren’t terrible but Meeker didn’t seem too happy having his picture taken today: 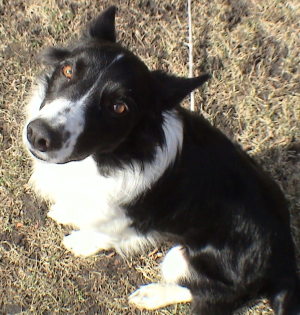 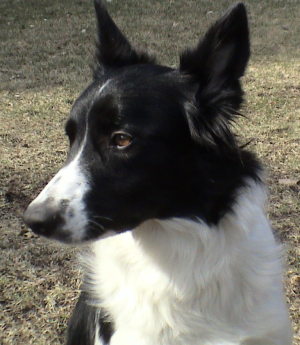 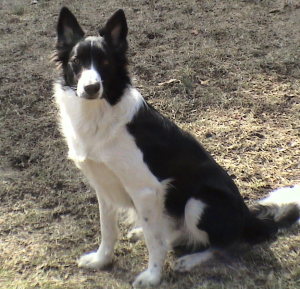 Meeker is doing well in agility. This past weekend he and Milo each earned 6 Qs in 8 attempts at the For Your Canine CPE trial (and my knee didn’t hurt during or afterwards either). I’ve been retraining Meeker to use a running A Frame and in spite of our sporadic practice due to the terrible winter weather he only missed one down contact all weekend.

I’ve only been occasionally training him in Flyball. He has a swimmer’s turn and is taking the ball off of Velcro on the box (at home). I usually work him for a few minutes at For Your Canine before I teach my Flyball class to start to get him to work in a more exciting environment. He’ll do well at Flyball, the challenge for Meeker will be the running of the other dogs.

Nancy always says when it comes to women Meeker is like Roger Rabbit and his response to the opening of Shave and a Haircut. He tries as hard as he can not to, but he just loses it and has to jump up on ladies he likes. He has also refined his approach to looking like he is relaxed and sitting only to leap up at high velocity and get women right in the kisser.

Meeker will play with his younger brother Petey as long as his favorite toy Milo isn’t around. Once Milo is on the scene it is Meeker’s job to keep an eye on him and he’ll get quite annoyed at Petey for trying to play with him. But otherwise they’ll chase and chew on each other continuously.

His itchiness seems like it might finally be under control (fingers crossed). In the last couple months Dr. Siwek may have found the right mixture of Chinese herbs to help him not be so itchy. He is growing in a nice coat, it doesn’t have the slightly greasy feel a few weeks after a bath and he doesn’t scratch and chew at himself constantly. It has been a long haul and I hope he is done suffering with the “itchies”.

The only remaining thing I’d like to help Meeker with is his inability to settle in stimulating environments. At agility trials or class he just can’t lie still in his crate. He hears the dogs running over contacts or through tunnels and he whines or starts barking. I’ve got him to chew his bone or if I’m present he’ll make eye contact and I’ll treat him. But he is never really at ease. So at trials I’ve been putting him back in the car after his runs so we can both relax. I’ve been trying a number of essential oils but so far haven’t hit on anything that will really relax him. At least once he is tired he will settle to a degree. But he is in such good physical shape (unlike me) that it takes a full day of trialing to even tire him a little.

Meeker is a soft and still somewhat impulsive little dog with a meek look in his eyes, in that respect he certainly lives up to his name. I hope we will celebrate many more birthdays together.