ADCH Meeker and Qualified for Nationals

Well Meeker and I finally did it and it wasn’t pretty! We earned his USDAA Agility Dog Champion (ADCH) title at the Boone County Dog Sports trial a couple weeks ago. 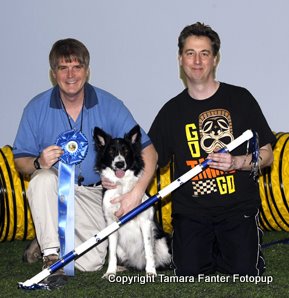 The judge was Paul Stolzenburg and I really liked his courses. We needed one last Snooker Super Q (top 15% of scores in his height group - there were 14 22” jumping dogs so there were 2 Super Q’s available - so we needed 1st or 2nd) to get his title.

I ran the opening getting 7-7-4 points (max of 3 reds allowed) and into the closing. I gave Meeker two bad weave entries, adding time to our score, but was pretty happy with my Blind Cross to Front Cross Front CrossLearning the Front Cross after the second time through the weaves to avoid an off course jump on the way to the final red jump and the 4 point A Frame.

But my stupid moment was on a simple Jump Wrap Jump Wrap/WrapJump Wrap Handling TipsJump Wrap Handling - With Video on the number 3 jump in the closing. For some reason I pulled sharply away from the tunnel and took Meeker with me and away from the jump. I thought I had earned a refusal and ended our run, but Paul didn’t blow the whistle. I got Meek over the jump and through the rest of the course for 48 points.

After talking with other USDAA judges I found the reason I didn’t get the refusal was Meeker never saw the jump. I had so “masterfully” pulled him with me that he didn’t actually refuse the jump. Some judges will call that a refusal and others won’t.

Well in any event the run was done. We were the first dog in our height, so I had to wait through the other 13 dogs and computer crunching to see if we’d done it. We got second place; Kurt took 1st place with the same score and a smoother, faster run. We took our celebration lap, once Meeker saw where I’d gone, and had a great time.

I sort of debated whether or not to post the video of my runs from that day, my handling since Meeker’s injury is just not what it was last year. But I’ve never hidden my mistakes from my blog’s readers before, so why start now? We haven’t been doing any practicing except in Dana’s class once a week. So 5-10 minutes a week isn’t enough for us to click. Every week we see Denise at Canine Massage Chicago to have her evaluate him for any stiffness, heat, or pain and give him a massage. He has been showing only normal muscle tension after class and sporadic trialing for a couple months now, good news. As I get more confident in his recovery I’ll start us practicing a little more and hope to regain that connection we had. I never do any work with Meeker now unless he is thoroughly warm and I keep him warm afterwards. It seems to be working. So here are our Standard and Snooker runs from that day:

I really want to thank Sam for her videotaping and great input on possible winning Snooker courses. She was a real pal!

The next Friday we went up to Think Pawsitive Dog Training to try to get our DAM Team qualifying score for this year’s Cynosport games. I was teamed with Kevin/Agape and Tracey/Shade and we “got ‘er done”; but it wasn’t pretty. Meeker and I were doing pretty well up until Relay where I actually had Meeker take the wrong side of a simple jump wrap on the second jump giving us an Elimination, I was stunned! But I had my wits with me enough to get to the exchange and we waited out the scores. We were in second place entering that final round and ended up in fourth and took the final qualifying spot. I didn’t record any of the scores… I not sure if we had 3 Es or 4! There was a fair amount of blowing up on those courses that day! Funny thing was they were really nice courses…

It took me a little while going through my records in Agility Record Book and perusing the USDAA, AKC and CPE rule books to determine his “official” title: ADCH Meeker SAC JM TM AX AXJ OF CL3

Here’s the dissection of the acronyms:

I’m very proud of Meeker, he’s come a long way from the dog I adopted almost 5 years ago. Thanks so much to everyone who has congratulated us on his new title.