I always thought that our dogs’ age would determine when they should retire from agility. I figured, like any sport and any aging athlete, there would be a tapering off of the intensity and amount of activity they could perform. I figured I’d notice and choose to retire them. But with three dogs of experience retirement is not all about age.

Our first dog Mr Peabody was born with Collie Eye Anomaly so we never knew what he could see. 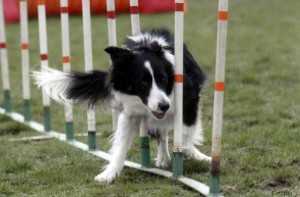 But you’d never know he had any vision problems - he could grab a frisbee out of the air, catch a ball and do agility. It was only after he had symptoms of glaucoma that we realized how bad it was when the vet asked “Does he run in to things?”; he was shocked when we said he did flyball and agility. Glaucoma took his vision in one eye.

Once he recovered from surgery he adapted very well to monocular vision. I tested him on agility equipment and he could still judge the take off spot for jumps, weave fine, and negotiate contacts fine. So after some months of only agility classes I decided to enter him in a trial again. It was a sunny summer outdoor trial and the standard course had a dark blue “C” shaped tunnel under the middle of the dog walk. When he went in to the tunnel he couldn’t tell which way the tunnel curved and turned directly in to the wall of the tunnel. Once he came out we thanked the judge and ran for the final jump. He wasn’t hurt or daunted - but then again Mr P never was. But that was the last day he ran agility competitively. From then on he ran for fun in the back yard or in classes where I could be sure the course was safe for him. So he was retired from competition.

Some time later in class his gait just didn’t look right coming over the A Frame. We took him in to the vet and found he had a tumor in his rear leg. That was the last time he ran agility. A year later he died after surgery to remove a second tumor in that area. He was twelve years old.

So Mr P’s was a progressive retirement after medical issues changed his ability to safely play agility. I like to think I was thoughtful about it at the time; but there was some ego on my part that wanted to keep playing agility with him. I love the sport, he was pretty good at it, and he was always game to do anything. It took seeing him hit the tunnel wall to realize that his years of experience playing the game with binocular vision couldn’t pull him safely through all situations when he only had one eye. But it didn’t mean we couldn’t still play together safely.

I think this experience taught me that our dogs aren’t invincible, it always seemed he could do anything, it taught me to step up and protect them from unsafe situations.

Milo was always a challenge at agility - mostly because I didn't put in the foundation work that I would today. 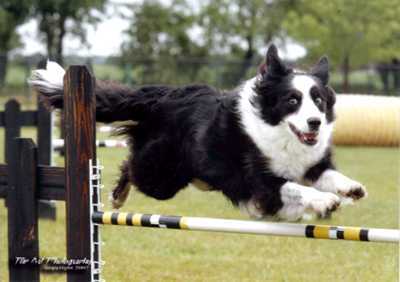 But he was a wonderful Flyball dog. My favorite quote from his adoption flyer was ”… has a strong love of tennis balls, even for a Border Collie”. Milo had a lot of unfocused “drive” and back then I didn’t have the space and, since he lived with Nancy, time to channel that drive into agility. He was all about jumping and running in extension. With what I know now about handling and training agility, I would absolutely love to get Milo again as a young dog from rescue. As it was we had moments of high speed brilliance on course.

Milo is interesting in that he was never a confident dog, but Flyball helped him gain confidence. Mr. P was his somewhat benevolent leader and he took comfort in being the follower. He loves repeating things and gets comfort from patterns of activity. So Flyball was perfect for him. That confidence spilled over into agility and his everyday life.

Milo had a bicep injury as a young dog, I was opening a door and he shot around behind me and put his foot in the path of the door swing. His foot was trapped under the door and he tried to pull it out… after 6 months of rehab he went a year and reinjured it again with another 6 months of rehab. Those injuries meant we didn’t do a lot of agility trialing, back then I didn’t have the desire to trial, I’d much rather train. But I remember the first time we did NADAC tunnelers and someone saw him and said “OMG that was fast! How old is he?”; they were quite surprised to hear he was 8 years old.

He learned Flyball just before multi-hole boxes and swimmers turns were really starting to be common, so he learned on a single hole box and did the “slide and smash” style of turning. I started retraining him once I bought a 3 hole box but he was really set in his ways. After a warm up you’d get a couple nice turns and then he’d revert to his old style. Since he liked it we did a fair amount of Flyball together and had a wonderful time.

Milo got regular professional chiropractic care, supplements, Adequan, etc. At around 10 he was showing some back twitching and soreness so we shot some x-rays. He was showing significant spondylosis in his spine. I’m pretty sure the slide and smash of flyball contributed to his back problems. So based on those x-rays we retired him from flyball and agility. He was one tournament short of his Flyball Master Champion (FMCh) title.

I guess I could have let him keep playing to get that title but I just didn’t see the point in risking more serious injury. He was more than willing to keep playing agility and flyball; heck he’d do it today at almost 15 years old. But as hard as it was to make the call I knew it was the right thing to do for his longer term health. Maybe this is what normal retirement looks like… 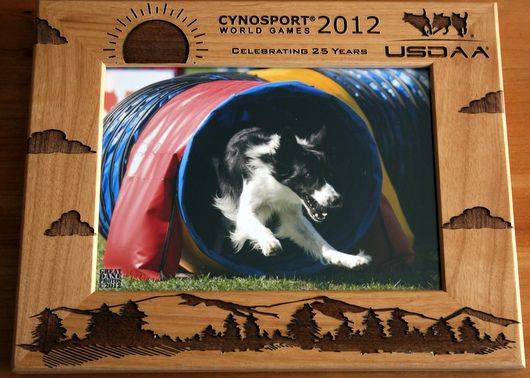 Meeker's story is still being written. He is 8 years old has been to two USDAA Cynosport Games and has some fancy agility titles. He is a very soft dog who has matured in to a confident and wonderful agility dog. He loves to play agility, but he also loves to chase his brothers, swim and tug on his wubba too. I can't say I've retired Meeker from agility - his lymphoma has done that, at least temporarily. For now he can't play outside either until his immune system can heal up some cuts in his skin to keep him from getting further infections. So for Meeker it is one day at a time.

So maybe that is the moral of this rambling post. You never know when the day will come to “retire” them. For me, it is about watching the dog and using what the dog tells me to determine when retirement is appropriate. It need not be “no more” agility, but it might be home agility or tunnels only or whatever. We create the games they play and I’m happy to change the games to suit their abilities - if that means we don’t compete anymore then so be it. Their health is more important than any titles we might achieve or championships we compete in. That might be something that my aging has taught me.

Read about what all the Dog Agility Bloggers have to say about aging.