I’ve mentioned before that I’d like to improve at using a clicker as part of agility training; and I just attended a seminar that really helped me.

Emelie Johnson Vegh and Eva Bertilssongave a two day seminar at K9 Playtime in Mundelein, IL covering the foundation information in their new agility clicker book Agility Right from the Start. There was a lot of material covered, too much for me to recount, so I'll give you a flavor of some of their ideas and the ones that were most interesting to me.

I only have good things to say about Emelie and Eva. They were very knowledgeable, friendly, outgoing, and gave a lot of hands-on constructive advice. You can also tell they really are friends too; they seamlessly continue with and enhance each others ideas. They also seem to have fun training and presenting.

In their seminar their approach is purposely handling system agnostic. Personally they train and use Greg Derrett’s handling system. In this context they are not teaching a system. They are teaching methods/procedures for training. These can be applied by people following established or their own personal systems. A key aspect of their philosophy is applying clicker training to the training process.

Over the weekend They focused on two primary training procedures: “Aim for It” (AFI) and “Race Reward”.

As part of their approach they have a concept of “voluntary training” or “spontaneous movement” where as soon as the dog is released it chooses to start working (the dog soon becomes heavily rewarded for doing so). This comes into play in both of these procedures.

I was interested in AFI because I wanted to learn how more “clicker-centric” trainers go about shaping. I’ve mostly used the clicker to mark desired behaviors prior to rewarding. When I’ve tried shaping things for fun I usually ended up with my dog staring at me and not having a good plan for proceeding to the next step. They have a nice method for shaping behaviors.

When it comes to learning new things I’m all about the diagrams; having a picture helps ideas stick in my mind. So here is my rendition of the diagram Eva drew showing how training sessions progress when using AFI. I’ll describe each circle/activity below. 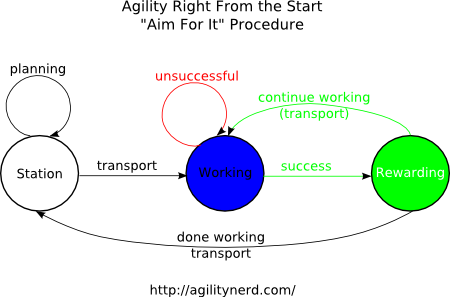 A station is a place where the dog can be put so the handler can think about the training session that just occurred and plan for the next session. It can be a crate, a mat on the floor, or any place the dog is safe and can relax without the handler having to actively mind the dog.

You can also move (transport) your dog back to their station when something unexpected happens so you can think about your next steps if you are caught off guard. In a class setting Emelie and Eva strive to wait until the handler has the dog on a station so they can give feedback to the handler. The handler need not worry about what there dog is up to.

This didn’t sound like that big a deal when I first heard it, but there are some important and subtle aspects that are really smart. They described and had us practice several ways of moving our dog from the station to the working area (i.e. obstacle). The dog

must enjoy the transport mechanism:

A leash can also work as a transport, but you don’t have as much ability to start your dog in as exact a location as you might want to start your training session.

You can also switch between transports, running out of cookies - change to collar transport, as long as the dog finds the transports enjoyable.

At the end of the transport you don’t sit or stay the dog and then release him, you don’t bring him into the general working area, you bring him to the exact point at which you want the dog to start offering the behavior you have planned. To me this was the key aspect of transports and was an “aha” moment.

Before this seminar when I tried shaping I wasn’t setting my dog up to succeed. If you want to shape your dog to step on a target, why not transport your dog right up to the target and then release him. He will almost immediately move or look at the new thing. That gives you an immediate opportunity to mark (i.e. click) and reward that first step in the behavior chain.

Another aha moment for me was to be prepared to mark and reward (i.e. click and treat) any additional progress toward the behavior while the dog is receiving the reward. If you are training stepping on a target and while you are rewarding the dog looking at the target he moves toward the target then you can immediately click and reward again. This can result in a virtuous cycle that helps the dog rapidly progress to the desired behavior.

Another thing to consider when using this protocol is that you can morph the reward into a transport. So instead of just giving the reward and waiting for the dog to take the next step you can use it as treat magnet and/or convert to another transport to reposition the dog to start again.

There were more details and a lot of good question and answer as part of the presentation and hands on training of Aim For It. The book also covers this in detail. Hopefully this gives you a sense of what it is about.

As Emelie put it, Race Reward starts with a “big, fat lure”. I was glad to see that they aren’t purists when it comes to clicker training. IMO too much fanaticism in any training approach tends to keep one’s mind closed to evaluating other alternatives.

Obstacles can then be added in the path of the dog to the helper. Of course this is the kind of approach that can be used to reinforce target training as part of a distance training approach. This is a pretty common method for distance training, at least around here.

They have an interesting use of Race Reward to help teach start lines. They follow the Race Reward procedure outlined above, but instead of continuing moving and immediately releasing the dog, the handler stops briefly and rewards any delay in the dog’s start with the release of the dog to the reward.

By shaping this behavior the dog will eventually come to a complete stop on their own to earn the release to the reward. This really shows the power of shaping. The dog learns themselves that a stay earns a reward. Eva and Emelie don’t even use a verbal cue to stay their dog. The automatic stay when the handler stops leaves the dog “in drive” waiting for the release word.

We worked with a training setup they call the “Bermuda Triangle” which positions three versions of the setup you are training (e.g. three jumps, three sets of weaves) in a rough triangular layout. This layout allows you to work using AFI where you can morph your reward in to a transport to take you to the start of the next setup. This gives you a short transport and keeps you both moving forward. For example, if you were only using one jump you’d have to transport around to be in the starting position. This is especially nice when you are working on the dog moving forward as part of the behavior, you gain some momentum as you move around the triangle.

We discussed NRMs and their thinking is it is likely you haven’t thoroughly trained the behavior and the dog just doesn’t really fully know it yet. I tend to use an NRM with Meeker that is a sharp intake of breath with “Oh my” or “oops” that gives him the information that he isn’t earning a reward. I also try only to use it for behaviors that I think he really knows. But I understand and agree with their thinking.

One of their training tenets is you don’t want to do anything in training that is inconsistent with your handling system. We had some good discussions about the difficulty of new students knowing if their choices are consistent with the student’s chosen handling system. Depending on the system, it can be difficult even for the experienced handler to know if their cues are consistent/appropriate.

They have just finished a book covering their full progression in detail with many photos, detailed descriptions and exercises. This seminar was part of a two week tour where they announced their book and presented some of their procedures at ClickerExpo in Portland, OR. It is kind of a daunting text: 1.5 inches thick, 440 pages and weighing in at 3 lbs. I have only skimmed it; but so far it is an easy read with a friendly conversational tone.

I think Emelie and Eva are bringing needed clarity to applying clicker training to agility and, judging by the audience at this seminar, they are also bringing some clicker trainers into the agility community. Even if you are only contemplating using a clicker in agility I recommend you attend one of their foundation training seminars or get a copy of their book to learn more about their training methods.