Many performance dog owners want to start “working on agility skills” immediately with their new puppies. Some have the goal of having that puppy ready to compete on the day allowed by their agility organization. With some dogs that is possible - but I think more dogs might benefit from a measured approach. 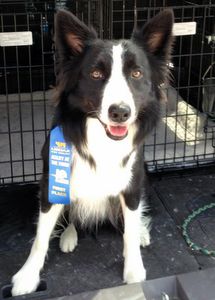 I adopted Meeker at 1 year old and about a year later he was competing and qualifying. For some dogs a year of training (once they’ve fully grown), or even less, can be enough.

But it isn’t the dog’s age or the amount of training that is the key. It is the dog’s maturity and, more importantly, the connection or working relationship between the dog and handler. When you are fortunate to have a dog “wired” for agility and for your training temperament/skills it is all roses. But what about when one or both of you aren’t the perfect match? Flyer and I might be the perfect storm… Flyer was pretty confident as a puppy but as he went through adolescence his confidence diminished and he became worried about a lot of things. He is very alert to sounds and motion in his environment and cautious about people/dogs surprising him. For example, he sometimes alarm barks at the sound of people talking 100+ feet away when we are outside or if he sees someone come out of their house when we walk down the street. He had plenty of positive exposure to novel environments and people but that is how he is.

To make matters worse that behavior (in my dogs) makes me a little crazy. “Why the heck is he barking and running away when my neighbor closes his car door when we are playing or training in the yard?” It happens multiple times a day, nothing bad ever happens, he’s met the neighbors many, many times and he even likes them. So then I get frustrated and that it is never good as a trainer!

I am patient training other people and their dogs who are like Flyer. But it is tough for me when it is my dog! The old trainer’s saying: “You get the dog you need” certainly applies here.

So I had to find games and rewards that I could use to help Flyer learn that playing with me was fun and build his confidence and his confidence in me. I had to change to very short training sessions and spend more time just playing together. We played chase games in the yard. We went on walks and many different treats appeared as we did Auto Check In exercises all around the neighborhood. We just hung out together and watched TV. I dialed back all “agility” training.

When it was time for one of our short training sessions I learned to bring a half dozen of his favorite toys and as many different types of treats. A toy might only be appealing for one repetition. Then I’d toss it aside and try a different one. If Flyer disconnected I’d run away as fast as I could and reward him when he came chasing after me.

If I became frustrated in training or even in play I stopped. Put him away for a few minutes and did something else. I wanted our time together to always be fun for us both.

We both learned about each other and over time play and training was longer and we were both more aware of each other. Flyer started working longer and longer and I had found the treats and toys that were the most rewarding for him.

So we had more of a relationship, more of a connection between us. On that foundation the “agility” training became easier. So waiting 6+ months to build that connection was the best decision for us. I could have waited even longer.

So now on the agility course we are working better and better together. There is no time schedule for that either - building a strong connection always has to come first.

Today dozens of dog agility bloggers are posting articles about Starting Your Puppy.