Well I’ve been really busy with work and haven’t been updating my blog with any of our dog’s activities. So here is an update along with some pictures.

Milo's been to two Flyball tournaments since I've last written about him. I think our team actually took first place in our division both times. It is interesting that we don't even have team practices anymore; we just show up and race. Of course we are one of those teams whose philosophy is to get points toward titles, so we aren't in the really fast divisions. With our younger, faster dogs racing we are typically running at about 21-22 seconds. The fastest teams are in the high 15 seconds (they could run a fifth dog and still beat us!).

Anyway some weeks after the first tournament Milo wasn’t jumping well at Agility class and fortunately we had our scheduled chiropractic adjustment later that day at TOPS. Turns out the muscles in his left rear leg were so tight he couldn’t extend his leg properly. This caused his back and pelvis to be badly out of alignment. It took some time (and cookies) for Dr. Jurek to get him loose and back in alignment. Since then he’s been looking great; last week he had one of his best nights at agility class in months.

On the really gross front, Milo had a bump on his side that looked like an insect sting. He kept licking at it and Nancy was applying meds to it. It just wasn’t healing and within a week it came to a head as though it was a zit. Nancy squeezed at it and… a tiny maggot came out! As she said, she was lucky I wasn’t there, I would have been dancing around grossing out. But she stayed calm because Milo was all worried looking. She squeezed more and nothing else came out, applied more meds, saved the maggot in a jar in the freezer. Long story short, the vet looked at the maggot and it was probably a fly maggot. No additional bites, or bumps have appeared, and the site has completely healed up, and Milo left it alone almost immediately. Ick!

We don’t really know Milo’s age, but he is probably coming up on nine years old, he is in great shape and plays with just as much vigor and intensity as he did when he was Meeker’s age. His coat is so full, shiny and extremely soft. He is still (reluctantly) working on getting Petey to understand his place in the family; Petey occaisionaly oversteps his bounds by trying to take toys out of Milo’s mouth. Milo tries to ignore him but will give Petey “what for” in those occasions, which is fine.

Meeker has completely recovered from his tricep pull. He is playing and going to agility classes with just as much enthusiasm as ever.

Meeker was having a hard time with the bands of thunderstorms that rolled across Chicago almost every day for two-three weeks a while back. He has never liked them, but one night it thundered continuously for over four hours, the storm front was rolling across the area just a mile or two north of us. He was just frantic, pacing, and couldn’t settle down. A week later in the evening we had really severe thunderstorms, high winds and rain right around rush hour, with localized flooding it took me almost two hours to get home from work. Poor Meeker was so stressed out he chewed up the dog gate keeping him in his room (which he could have jumped if he wasn’t so upset), and scratched up the door to the garage trying to hide. I felt terrible that I couldn’t have been there to let him out.

I’ve got some over the counter herbal medicines that I’ve been trying and they seem to help a little. Fortunately we haven’t had such severe weather since then. Nancy and I attended an introductory TTouch seminar and learned about applying wraps and basic TTouch circles. I used some of the touches on Meeker when I got home from that storm and he really responded quickly to them.

Meeker’s itchiness was greatly reduced for a while but now it is coming back a little more, but not nearly as bad as it once was. He is also getting more aroused waiting in his crate at class and at motorcycles when we are driving around. So I’ll have to ask Dr. Siwek to consider adjusting his herbs and flower essences when I see her next week.

This week Meeker found some raccoon poo to roll in… twice… so I’m getting good and washing his head and shoulder outside with the hose single handed.

Meeker is doing quite well at agility, I’m still not entirely happy with his descent of the A Frame but I’m just leaving the Stride Regulators on all the time at home and doing about 4-6 A Frames a day and rewarding lavishly when he has beautiful ones. Anne Riba also noticed I tend to release him from his 2o2o about two steps away from the contact and he is starting to anticipate me. So I’ve been trying to be less predictable about when I release him and insisting on only a verbal release. I’ve been playing with Weave Entries and he is doing very well.

What can I say about the charming little guy? Petey is really cute, and I’m not just saying that… OK maybe I’m a little biased. He has this happy smile he gives you that is really disarming; even when he is being really bad :^) He’ll do something he shouldn’t and then he’ll just give you that smile… He also has the Mr. Peabody set to his face he’ll get when he really doesn’t want to do something.

He is quite the challenging little guy, being so smart, fast and persistent makes him both easy and difficult to train. Nancy has him in his second basic obedience class. He loves to tug, he’ll seek out people and can be easily convinced to lay down with you while the other dogs are playing (something I wish I could more easily get Meeker to do). “Against her will” I signed Nancy up for a two session puppy agility seminar as a birthday present with Mary Ellen Barry at Dana Pike’s place in October.

Petey is quite resilient and that resilience was put to the test the first night of the new obedience session. A new student with her Rottie was pulled over and dragged across the room (still holding the leash) as her dog went after Petey. He got a little of Petey’s butt fur as Nancy got him out of there and the trainer stepped in and helped stop the Rottie (who was moved to a “Feisty Fido” class instead). Petey was a little concerned but came back into the room and was fine a few minutes later and was playing just like usual. Can’t over estimate the value of resilience in a dog…

Petey is getting pretty big. At six months he is about 19 inches at the withers and I think something like 32 pounds. He is getting quite the full and wavy coat for such a young dog. It is already longer in spots than Meeker’s short coat. His coordination in improving, he seems to know better where his hind legs are and coordinates them better when he is rocketing around.

That’s about it from here. I’m sure I’ve left out some stuff that has been going on with the pups but I’m also sure folks are tired of reading about them at this point too :^) Here are some pictures of them rocketing around in the backyard on a warm, sunny, Sunday afternoon last weekend.

Petey, Milo and Meeker Waiting For Each of Their Toys 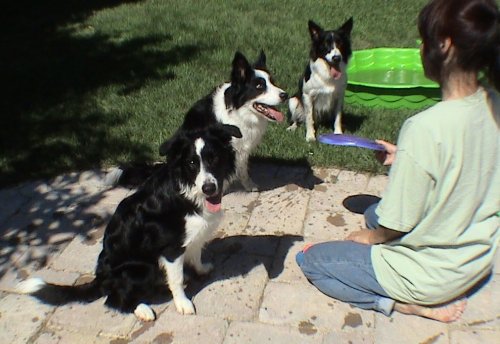 Petey Is Tired of Waiting 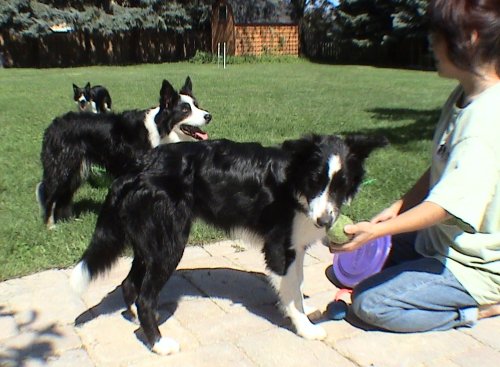 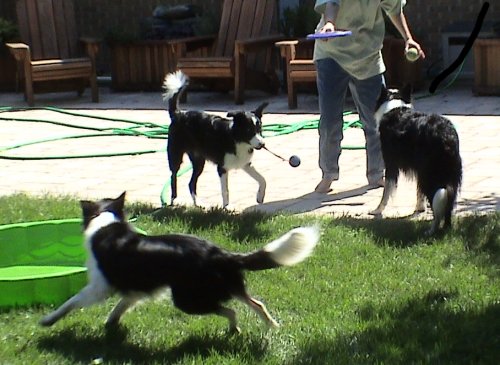 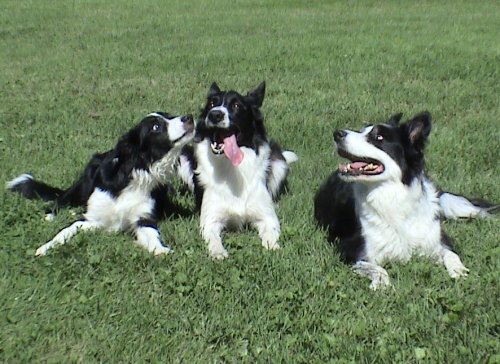 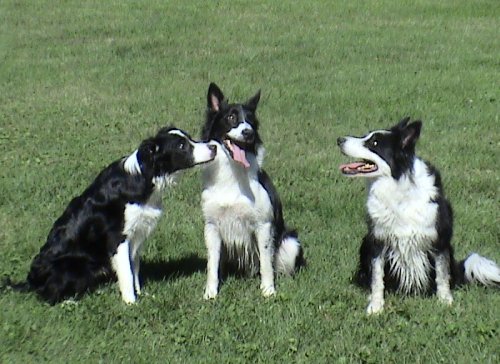