Meeker and I trialed at the RACE Agility Club's USDAA trial a few weekends ago and had a good time. One of the judges was Becky Dean who we've trialed under a couple times. She is one of my favorite judges. She is friendly, approachable, has appropriately challenging courses, and is just a genuinely nice person.

I liked all of her courses on the weekend but I wanted to focus on her Masters Pairs course on Saturday and a really nice Masters Jumpers course on Sunday. Becky was nice enough to let me reproduce her courses here for my discussion of appropriate and inappropriate Ketschkering.

The reason to use a Ketschker (a “Reverse” Front Cross to a Blind Cross) is when you need your dog to Wrap Jump Wrap Handling TipsJump Wrap Handling - With VideoJump Wrap/Wrap a jump tightly and you want to be on the inside of the jump (wrap dog to right of jump - afterward handler is on dog’s right, wrap dog to left of jump - afterward handler is on dog’s left). In the “olden days” you might use a Post Turn/Shoulder Pull Learning the Post TurnPost Turn/Shoulder Pull/Pivot Turn but the Shoulder Pull doesn’t present the dog with as many collection cues as the Ketschker; consequently the Ketschker can give a tighter wrap. Furthermore, the Shoulder Pull uses less handler motion and can be less motivating to some dogs. Lastly, the Shoulder Pull tends to keep the handler with the dog until the pull is complete, where the Ketschker allows the handler to stay ahead of the dog when coming out of the wrap.

Before I describe how I screwed up let me give you some background on the events leading up to the trial. Dana Pike asked Meeker and me to be her pairs partner with her awesome little dog Tangle for the last leg Tangle needed for his ADCH. I was flattered to be asked but also nervous about screwing up!

There was a huge thunderstorm that moved slowly over our house from 12:30AM to almost 4:00AM Friday night so neither Meeker nor I got much sleep. I’d like to attribute my poor decisions to the sleep deprivation :^)

Masters Pairs - When Not to Ketschker 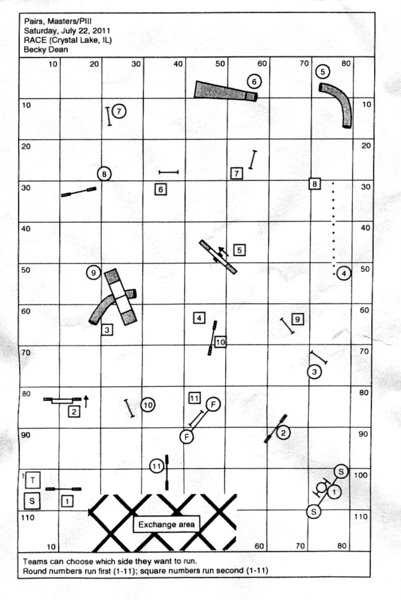 The course was built with jump 4 closer to the teeter and off course jump 9 was more of an off course possibility than in the diagram. I was running the second half of the course (numbers in squares) and my only concern was Meeker taking jump 4 in full extension and having him go off course to jump 9. He’d be full speed coming out of the tunnel and I figured I needed to do the following for jump 4:

Well somehow I decided I could use a Front Cross Learning the Front Cross - VideoFront Cross to accomplish #1 and then use a Ketschker to accomplish #2, #3 and #4. Except not a real Ketschker, I wouldn’t continue the Ketschker by moving forward, as you would to wrap the jump. I would reach back with my right arm and push Meeker onto the teeter. Well that was just dumb, remember I’m claiming sleep deprivation… I should have known that as soon as Meeker sees me cue the Jump Wrap he, correctly, collects, takes the jump turning over the bar wrapping the upright and is ready to come to the front side of the jump.

Here’s the video where you can see me perform a late Front Cross immediately into the Ketschker and Meeker wraps the jump and is starting to run into the back of my legs when I reach back with my right arm to push him out to the teeter. So I don’t push enough and he goes past the teeter entry for a refusal. I get him back without taking #4 as an off course (using a Backy-Uppy) and put him back on the teeter:

So clearly using the cues for a Ketschker and trying to undo some of them there was a poor handling plan. There are a number of handling solutions that would have worked better (see the video at the end of the article for demonstrations):

Masters Jumpers - When to Ketschker

Becky’s Masters Jumpers course on Sunday was a really nice one. It had two places where a Ketschker could be considered for tightening up the dog’s path: jump 8 and jump 16. 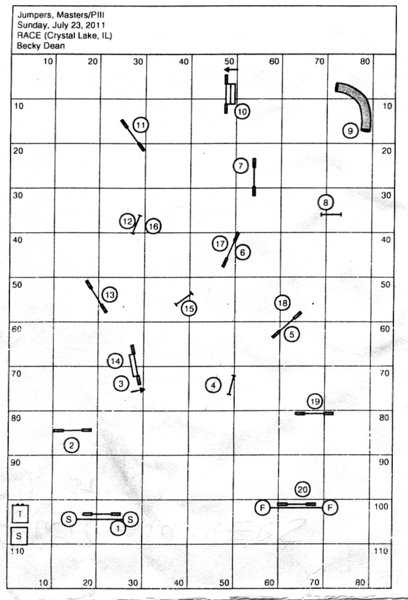 Jump 8 to the tunnel wasn’t a great Ketschker candidate because it is already “clear” to the dog that the tunnel is next (there are no other obstacles out there). It didn’t matter if handlers Front or Rear Crossed on the take off side of jump 8. So dogs were turning tight over the jump and ending up right on line to the tunnel entrance. The Ketschker definitely would have worked; using the same Front Cross to Ketschker combination I attempted in Pairs (but without the foolish push out of the Ketschker I attempted in Pairs).

A better place for the Ketschker is at 16. It is a slightly shorter and straighter path for the dog to 17 to turn the dog right over jump 16 and the best handler path from 16 to the ending is with the dog on the handler’s left. That is exactly when a Ketschker works nicely. The handler can move aggressively toward 16 with the dog on their right, Front Cross and then use their right arm to signal the jump wrap (turning the dog to the dog’s right). As soon as the dog reads the wrap the handler can move forward to 17. The dog comes around the jump and is on the handler’s left side and jump 17 is directly ahead of the dog. Then both are off and running down the final line of jumps.

The Ketschker worked like a charm. Many dog were sent very wide: almost out to the back side of 11, by Rear Crosses or Front Cross to Shoulder Pulls. A Front Cross Jump Wrap turning the dog to their left over 16 and with the dog ending up on the handler’s left was the next best strategy, but it put most handlers pretty far behind at the start of a 70 foot jump chute. I think someone did a Front Cross jump wrap, turning the dog to their right over 16, and got a tight wrap, but also the dog on the handler’s right going to 17 and the handler is on the outside of the arc to the finish - OK if the handler is faster than the dog.

I think the tight turn at 16 is one of the reasons Meeker and I took first place in the 22 inch class.

Here’s backyard course that combines the two challenges I described into a single course:

You’ll see the opening 1-5 is taken from her Pairs course and the rest is a mirror image of the closing sequence of her Jumpers course. Here’s some video of Meeker and showing the alternate ways to handle both halves of the course. What you can’t see are the last two jumps and how far behind I get as Meeker comes down the line - it was a longer sequence at the trial too so being ahead at jump 13 is important!

My big thanks to Becky for letting me use her courses to discuss these handling choices!