A Strategy Note for Relay/Pairs in DAM Team Events

As I mentioned previously thus far I’ve only competed in one USDAA DAM Team competition. 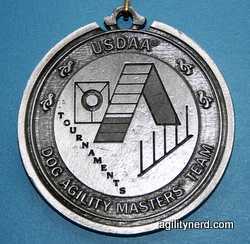 I learned something that is probably obvious to more experienced handlers but I thought I’d share it.

First some background. DAM team events are scored using “time plus faults”. As long as you complete the course without an off course you can fix any refusals and a fault of 2 seconds is added to the time for your run. You can accrue up to 2 refusals per run.

If you have an off course (an elimination or “E”) or 3 refusals 1/3 of the value for that run is deducted from the team score (but the score can’t go to zero). Obviously if you can’t run clean at least don’t go off course.

In Team Relay there is an interesting nuance. (In Relay the two/three dogs each run a portion of the course and the score is the total time plus faults). Several times I saw a handler accidentally send their dog off course and then immediately run for the exchange area. I was a little surprised and then someone pointed out that since they weren’t earning any points for that part of the run it was in the team’s best interest for them to have as short a time for their third of the run.

It is possible for teams with eliminations to still qualify so having a low time with 1/3 of the value deducted is better than taking the time to complete the course after the elimination. So file that “fun fact” away should you ever need it. Of course if your team is just having fun, is already too far from qualifying, or isn’t intent on qualifying you might as well continue to the end of the course.