Well there is nothing more tedious than a blog post describing every run of a 3 day weekend; the executive summary is it was one of our best weekends ever: we got DAM team, Grand Prix and Steeplechase Qs and Meeker earned his Master Agility Dog (MAD) title. 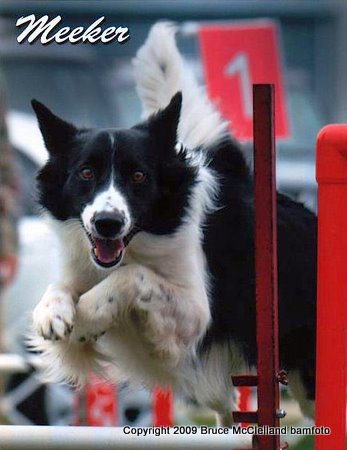 Here is a rundown of the highlights.

It was Meeker and my first time ever trying DAM Team (a three dog team competing in 5 courses: Standard, Jumpers, Gamblers, Snooker, and Relay whose total score is the combination of the scores in all the runs). It turned out our last minute team was a really good one. It was made up of Diana and her skilled young Belgian Dart, Kevin and his Masters dog Shade and me and Meeker.

We were doing well enough in the early rounds, but we put ourselves near the top after our Snooker run. It was a challenging course, in the closing you had to take a numbered obstacle and a tunnel of your choice (there were 4 tunnels set up) before the next numbered obstacle. Diana came up with a really good plan where we took all four reds for 6, 7, 7, and 5 points. That maximized our point collection while leaving just enough time to get the closing done. Kevin got through 6 in the close and I got through 5; we still had time to get through 7… So that put us in 3rd place after that course. Pretty amazing for me since I’d gone 0 for 7 in Starters Snooker!

Long story short we “got it done” and ended up in 2nd place! It was an almost 12 hour day with around 50 teams competing and it was pretty tiring, but it was a lot of fun. We got medals, a team photo and a snappy dog footprint photo frame as our 2nd place prizes.

Since the USDAA Nationals (aka the Cynosport Games) will be “nearby” in Louisville, KY this year there are many tournament class entries at local trials. Like many locals I’d never drive to Scottsdale for the games, but I am definitely trying to qualify this year. I think there were something like 120 entries in Grand Prix and 100 in Steeplechase on Saturday. So the competition was deep and there are a lot of skilled, fast teams in the area.

So I was happy to have us qualify in both Steeplechase and Grand Prix in 7th and 6th places respectively. I was all about running clean and not screwing up. Getting Qs in all three tournament classes was a thrill.

I messed up our Gamblers run, I’d collected 40 points and was right where I wanted to be when the buzzer went off to start the Gamble. But I was the slightest bit hesitant and Meeker took an off course jump and then the first jump of the gamble at the wrong angle, earning a refusal when he passed the start of the dog walk.

Otherwise on Saturday we Q’d in Standard and I was proud to Q with a 1st place in Jumpers at the end of an 11 hour day on one of the toughest Jumpers courses I’ve run outside of training. If memory serves me I needed 5 crosses of which 4 were front cross jump wraps to “get ‘er done”. There weren’t many Qs on that course.

We had six runs on Sunday. I got the gamble in Gamblers to earn a “5th place”. I had marked Meeker’s non-2o2o on the A frame and he came with me instead of taking it again so that kept me from getting some points. I’m always thrilled to get a Gamblers Q since I don’t explicitly train for distance; I just support his motion and hope for sensible courses. We Q’d in Standard and came in 7th (out of the money) in Round 2 of Steeplechase.

In Snooker I got triple 7s in the opening and was on the way to obstacle number 6, the weaves, in the close but didn’t watch the line from 5 so I pushed on Meeker’s line at the last second and he came in at pole 2. There were a lot of dogs going for a Super Q and that blew it for us, but at least we earned a regular Q.

In Masters Pairs (the last leg Meeker needed for his MAD) I got the easy half of the course. My partner Jeremy’s fast Aussie had some sort of refusal (I didn’t actually see all of his half; I was watching Meeker) but we had enough time to still qualify; I wasn’t sure until the scores were posted.

Our 6th run of the day around hour 10 was Jumpers and it was another tough course with arguably five Serpentines Serpentine Handling TechniquesSerpentine Sequence ending in Jump Wraps Jump Wrap Handling - With VideoJump Wrap Handling TipsJump Wrap/Wrap. I was really beat by then and had to concentrate and force myself to keep working in the walk through to get the course into my muscle memory. But I was slow coming out of one of the front cross jump wraps and that caused Meeker to hesitate in front of a jump and earn a refusal. So no Q for us. I think there were only 5 Qs among the ~15 22 inch dogs that stuck it out to the end.

So a really awesome weekend! Three tournament Qs, 6 for 8 Masters Qs and Meeker’s MAD. Now we only need one more Steeplechase Q to qualify for Nationals. We’ve been doing well trialing lately and I’m just thrilled. I also met some new nice people who turned out to be AgilityNerd readers too!