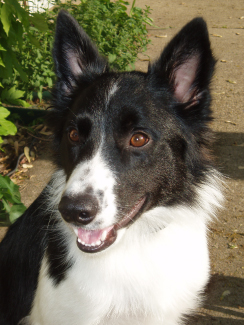 Yep, that’s right, Steve finally has his very own dog. For over ten years I have been fortunate enough to train and play with Nancy’s Mr. Peabody and Milo and like a “Weekend Dad” return them back to her tired and dirty for her meticulous care and feeding. For the longest time I had many excuses, a tiny backyard, a long work schedule, etc. But with the purchase of my new house with a big yard and the realization that if I waited for the perfect time to get a dog I’d never get one, I adopted Meeker.

Nancy and I started scowering the Border Collie rescue websites back in February. I won’t take you through the whole evaluation and adoption process but I made a number of dumb mistakes and I am fortunate to have met some wonderful people who helped me and gave me advice. I would especially like to thank Meeker’s foster Mom Gen at MidAmerica Border Collie Rescue, Laurie (Reno’s Mom) at Midwest Border Collie Rescue, and Susan and Robin at Great Lakes BC Rescue for their patience, travel, photos and dozens of emails. Big thanks to Dana Pike and Sherry Kluever for looking at video and photos of dogs I considered and for trying to give me the basics of evaluating dog structure and gait.

Years ago after visiting beautiful Meeker Colorado for the incredible annual Meeker Classic Sheepdog Championship Trials Nancy and I decided “Meeker” would be a great name for a Border Collie. It can be said with a sing-song high pitched voice so many dogs find fascinating: “Meeeee-Ker” and shortened to “Meek” or “Me” for the de riguer single syllable BC call name. Someone mentioned I could register him as “It’s all about Me, Meeker” as his “official” name but I think that might be a little too much.

We picked up “Duke” formerly “Gus” from Gen’s in Indiana on April 22nd. During the 2+ hour car ride he was calm and sat in the back seat in his car harness with me. He did have his first (and so far only) car sickness but it was a pretty long drive in a stressful situation (leaving his foster Mom and pack).

He is a smart, sweet little guy who really loves women; he is squirmy and licky when he meets them. He is also quite confident and self assured and very much testing his boundaries in his new home. Apparently, he ran the household in his original family.

Meeker has a strong herding instinct, he’ll automatically drop to the ground and stare at you or the other dogs if a toy is going to be thrown. When playing with no other dogs he’ll fetch and often retrieve a ball. But when other dogs are around he only wants to play the “I’ll steal your toy game when you drop it” and the “I’ll chase you when you get your toy so I can steal it when you drop it” games. Mr. P doesn’t put up with it but Milo is pretty confused by this little guy always on his shoulder who darts in to take his toy. Milo will go back to get his toy as soon as Meeker drops it. For now Milo and Meeker are playing separately until Meeker learns some more self control.

Meeker also has a strong prey drive, at least for squirrels. In the yard he is off like a shot if a squirrel is running through the trees along the edge of the yard. On a walk he’ll also spot squirrels almost a block away and sometimes stalk up on them. So that is a good opportunity to distract him and take him off in another direction. The Suzanne Clothier seminar I attended gave me some tools to use to improve his coping with these distractions. He is already starting to respond and will “Auto Check-in” if not faced with too much of a distraction.

He is somewhat concerned by new sounds and movements outside of the yard and will bark if he gets too aroused. I’m working on getting him to check in in those situations too. Lately he seems to be able to calm down if I tell him “It’s alright” and he’ll come to me if I call him at the first signs of his real interest. I’m sure some of this is due to his moving from a rural setting to a suburban area.

With Nancy’s help I’m starting to add supplements to his diet to help with his rough fur and his tendency to itch (some of the itching could also be due to the stress too). So far he is eating Canidae dry food with carrot, yogurt, banana, omega-3 fish oil, coconut oil, a multivitamin and some low fat cottage cheese. Surprisingly, although only a year old and an inch shorter than Milo, Meeker weighs the same 44 lbs; and all muscle.

I’ve forgotten what it is like to have a dog with so much energy and so many skills to learn. Even though he is still getting over his move, his new family, and new surroundings he can go, go, go all day long. I’m trying to use games and training to tire him intellectually as opposed to just trying to physically exhaust him (then he’ll only be harder to exhaust!). He now sits and waits at doorways and his crate, is learning puppie push-ups (sit, down, sit, down, etc), is learning to retrieve, and really loves to play tug. With all his exercise, he may be the best weight loss and physical fitness coach I could ever have asked for…