I’ve got some ideas that will stir some folks up! 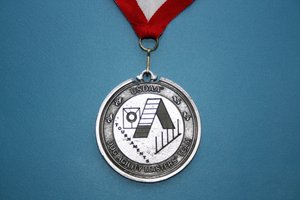 Some agility organization should reward fast and daring handlers who aggressively handle courses. Now I don’t want this to in any way increase the difficulty of the sport for the dogs. The dogs are already performing above and beyond; they are the true athletes. I want to reward the athletic and daring handler!

I’d love to find a way to have the team that features not only the fastest dog but also the fastest, most in tune handler be the winner. Every now and then you see a run where the handler is just going full blast, without any hesitation, just attacking the course and their dog racing right with them. The kind of runs where, even at a quiet local trial, the onlookers cheer at the end.

Many bicycle races have awards for the “Most Aggressive Rider”. These are given out to the rider who tries hardest to win or who attacks the front the most often, or tries a long solo break away. The rider winning the Most Aggressive Rider jersey needn’t win the race either (often they don’t). As a spectator it is fun to watch the rider who “goes for it” and you really root for them to win.

So why not award extra points or another type of award for the team whose handler really takes handling risks and risks an NQ. I’m thinking of the handler that beats their dog to the end of a running contact and gets in a cross to avoid an off course. Some title that rewards handler speed and daring but doesn’t risk injury to the dog.

Every course need not present one of these awards either. While some word-smith could put this into words better than I can, I bet most folks would agree when they see a run where a handler who would deserve to win this award. Heck maybe this could be an audience granted award.

Another notion agility could take from professional bike racing is incorporating sprints within the course. This could be a sub sequence of the course where the dog and/or handler are timed and the fastest time through the subsequence qualifies for a separate prize. I could imagine this being done on a two or three jump chute on a jumpers course for example. Or it could be around a single obstacle like the dog walk or the weave poles. I especially like the idea of timing the handler and not the dog.

Let’s reward handlers for being physically fit and really moving on course!

How about rewarding handlers who handle “outside the box”? Think about all those Advanced/Masters level courses where there might be 100 teams competing and you only see a couple handling variations. You’ll see a lot of people who are being cautious just ensuring they get a Q.

I like to see the handler who might layer some obstacles, handle from the opposite side of a contact, take a longer lead out, etc. The handler doing something different than the others and then having it work too.

The caveat would be having the handling still “make sense”. I’m sure we’ve all mishandled a course (once or twice), so you wouldn’t want to reward someone whose plan couldn’t be successful. But you would want to reward someone who knows their dog’s skills and can use them to get where they need to be in an expeditious, or even, risky (in the sense of risking an NQ) way.

We already have games in agility to test, primarily the dog’s, special skills. Gamblers, in addition to its strategy aspect, is a game where dogs are rewarded for working away from their handlers. Taken further, while it would be impressive to see a handler stand nearly stationary in the center of a ring and direct their dog through an entire standard course, that is a different kind of skill (we could call it “Super Standard”). I’m just throwing out ideas for rewarding a handler’s athleticism.

Maybe some of these notions run the risk of moving agility toward an “X Games” mentality. But it is so thrilling to see a handler who really “goes for it” and it would be great to encourage more handlers to try as long as the dogs stay safe.

So I have to start getting serious about getting into shape, but I’m up for trying to win the “Most Aggressive Handler” award some day. What about you?