As promised here’s the competition 2016 February National Dog Agility League 50 x 50 “International-style” course I designed and, since Bud likes competitors to think about the courses before running them, I’ve included my handling thoughts for the course too! Here are the official course diagrams for all three of this month’s NDAL courses .

Since trainers whose student’s compete in NDAL use these courses as the basis for their class courses, I came up with 11 additional Starters, Advanced, Masters, and Masters Challenge (aka International) style sequences for your use in training!

Here’s the obstacle setup in feet and meters: 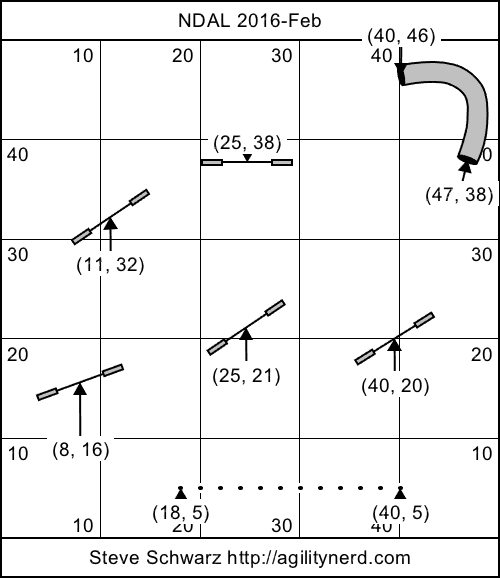 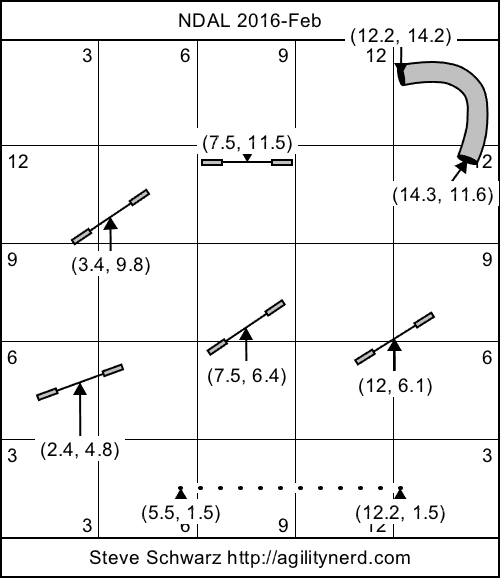 Obstacles 1-2 can be handled from either side as a Serpentine Serpentine SequenceSerpentine Handling Techniques. My preference would be to follow the blue handler line and stay on the take off side of jump 1. Then be ahead on the landing of jump 2 to show the path to the tunnel.

If you start on the landing side of jump 1 I’d either Front Cross Front CrossLearning the Front Cross or Blind Cross over jump 2 to get my dog on my left on the way to the tunnel: 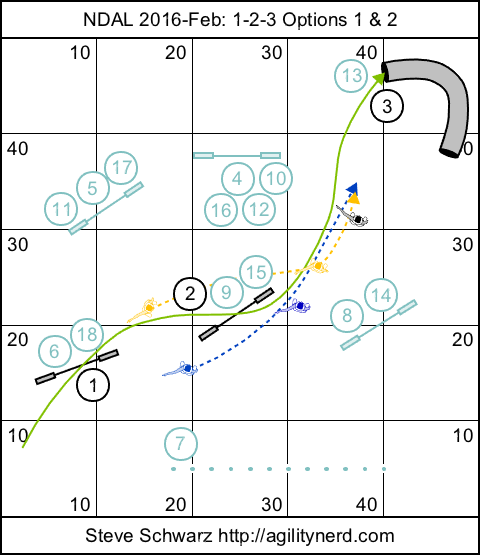 I’d send the dog to the tunnel and be in position on a line to the take off side of jump 4 so I could pick my dog up on my right arm coming out of the tunnel and run straight to the jump.

Then it’s just dog on right through jumps 4-5-6 and the weaves.

Then things get a little interesting. I’ve discussed handling the setup of 8-9 in my article/video on the Holmberg Double. There are many, many ways to handle this sequence. The handling I’d use is shown below:

As shown above, I’d keep my dog on my right and Push to the Back Side Back Side/Back Side JumpThe Connection Between Threadles and Back SidesHandling the Quad Back Side - Patrick Bucher Course/VideoBack Side of Jump Handling Combinations - Video of the right jump standard and then either Front Cross or Blind Cross while my dog is still on the take off side to put my dog on my left when he lands.

Then on jump 9 it is a Push to the Back Side again, slide across the landing side of the jump and then Blind Cross as the dog takes the jump to put him on my right on the way to 10. 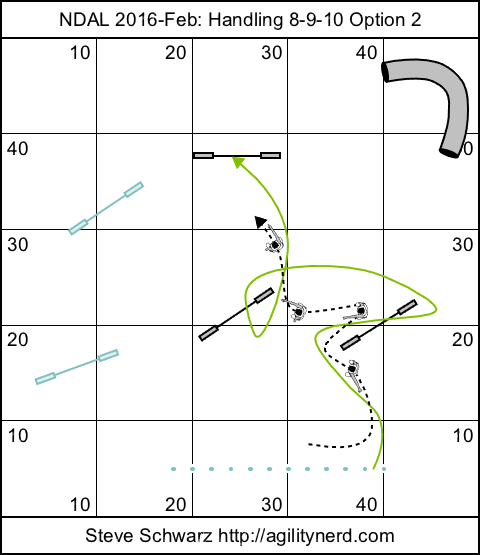 You could Front Cross the exit of the weaves to put your dog on left, then move to the take off side of jump 8, rotate into your dog, and “throw back” via a Ketschker or Jaakko. Either effectively, a Front Cross jump wrap followed by a Blind, to put your dog on your right after the jump. (You could also Shoulder Pull through the turn but the dog’s path will be wider)

Coming out of the tunnel it’s a different approach to that “darn” pair of jumps, except this time there is only one Back Side: 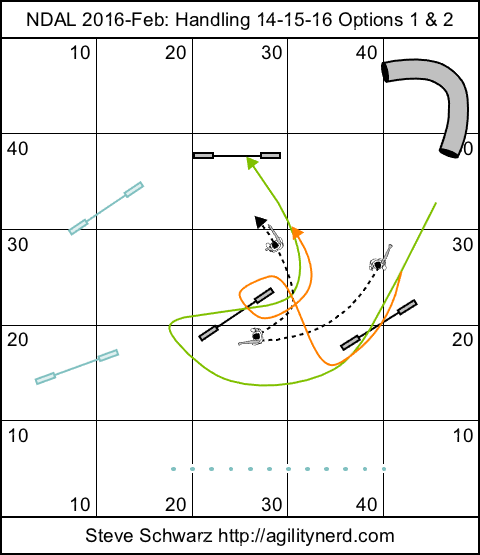 I’d prefer the green dog path above and follow the handler path shown; I’d pick my dog up on my left and support jump 14 and drive forward toward the left edge of jump 15. From there it’s the same as my preferred handling for jumps 9-10.

The orange dog path is something to consider; Jump Wrap Jump Wrap/WrapHandling 360 Jump Wraps aka "Over and Over" - VideoJump Wrap Handling TipsJump Wrap Handling - With Video jump 14 to put dog on right and then handle jump 15 as I describe in my second option for jump 9.

Then it’s just pulling the dog through the remaining two jumps to the finish!

With my injured foot I wasn’t able to run this course myself but an agility pal of mine set it up and really “rocked” it. I can’t wait to run it myself!

I hope you try this course and your group tries other NDAL courses!